Summary Of Findings: Bayesian Analysis (4 out of 5 Stars)

Note: This post represents the synthesis of the thoughts, procedures and experiences of others as represented in the 12 articles read in advance of (see previous posts) and the discussion among the students and instructor during the Advanced Analytic Techniques class at Mercyhurst College on 6 MAY 2009 regarding Bayesian Analysis specifically. This technique was evaluated based on its overall validity, simplicity, flexibility and its ability to effectively use unstructured data.

Description:
Bayesian analysis is a method that uses Bayesian statistics to assess the likelihood of an event happening in light of new evidence. It generates an estimate and the use of Bayesian statistics in Intelligence analysis allows for the uncertainty of the traditional intelligence data set to be understood in a scientifically valid manner.

Strengths:
*can limit analyst biases by reducing the weight of evidence simply because it is new or vivid
*forces the analyst to resassess evidence and consider alternative possibilites
*adheres to rigid mathematical formulas
*provides a numerical likelihood
*provides audit trail and ability to reproduce results
Weaknesses:
*Probabilities are based largely on subjectivity
*Susceptible to biases
*Highly complex problems require heavy computations
*Can be mathematically complex
*Not always useful as a stand alone method (works well in tandem with methods like Delphi); may require SMEs for determining probability distributions
*Some reliance on ambiguous validities
*"Negative evidence"--absence of positive evidence 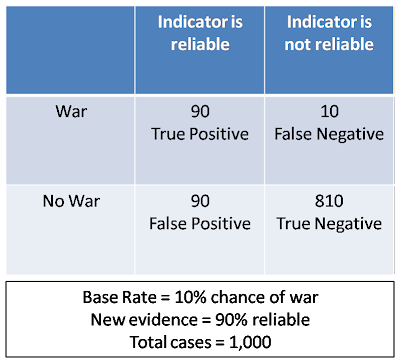 Experience:
To understand the basic mathematical principles behind Bayes, the class worked through some sample problems. One of the problems was based on a medical test with an 80% accuracy rate for a cancer with 2% affliction rate in the general population. The class applied this to a sample population of 1000 cases. We established a matrix and assessed the true positive, false positive, false negative, and true negative quantities (16, 116, 4, and 784 respectively). We plugged these numbers into the appropriate matrix fields. We then divided the number of actual cases of cancer (20 or 2% of 1000) into the number of positive tests (132--the 16 true positives and 116 false postives). The result was 15% rate of those who have the cancer from the positive tests, a rather stark difference from the 2% base rate! This problem actually reflects the number of breast cancer rates from a medical treatment from around a two decades ago!
Note: see the matrix for a synopsis of another of the problems we worked through (a peice of evidence emerging suggesting a cause for war).
The class also used a Bayesian application to assess the likelihood we would contract swine flu. We started with the initial hypothesis that we would contract swine flu or we would not contract swine flu, and assigned an initial probability to each hypothesis (the latter >5%) We then added weighted evidence which influenced the base rate of the hypothesis. After all the evidence was entered, the class assessed the likelihood of contracting swine flu.
Posted by Kristan J. Wheaton at 3:58 PM