Crime Mapping and the Training Needs of Law Enforcement


Summary:
Ratcliffe's article Crime Mapping and the Training Needs of Law Enforcement identifies three main aspects of crime mapping, or applications of geographic information systems (GIS): hotspot mapping, CompStat and geographic profiling. Techniques in exploratory spatial data analysis (ESDA) can reveal crime patterns and hotspots of criminal activity that are invaluable to law enforcement agencies. Spatio-temporal mapping and geographic profiling using the GIS methodology is an evolving technique with increasing complexity and can offer vital information for intelligence-led policing in crime reduction and prevention. Ratcliffe mentions that although this technique offers a new form of useful intelligence for law enforcement, it does not undermine non-spatial features of crime records such as modus operandi and temporal variables.

The author defines crime mapping as a way to collect, store, analyze and disseminate information relating to the earth. The first application of GIS in law enforcement is hotspot mapping. This is the input and conversion of crime data into spatial features. The following two images are examples of hotspot mapping of vehicle crimes in Philadelphia for July 2002. In the following two images, Image 1 demonstrates how hotspot mapping appears when each individual crime is represented as a dot while Image 2 shows the same image after using kernel density smoothing. Image 2 is less precise but more clearly displays the actual hotspots. 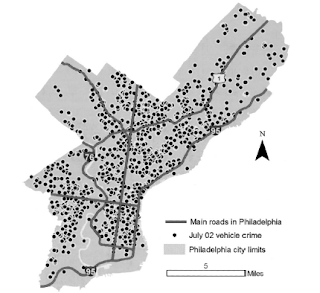 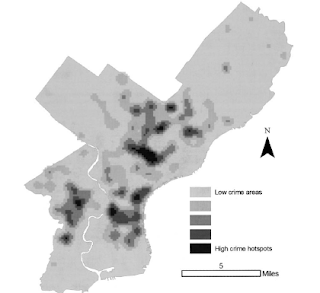 Although GIS is most frequently used to map property and violent crime, it can also geographically represent calls for service, race and other socio-economic data for a more complex analytical map. It is also effective at demonstrating measurable long-term crime prevention and reduction.

The second application of GIS is CompStat, or Computer Statistics. This is a management process that increases accountability and requires commanders to actively analyze crime patterns. As the author states, it requires a quick conversion of crime data to geographic visuals of the data. The third and final application is geographic profiling, an investigative technique that aids in serial crimes and helps to identify potential criminals on a map. The idea was developed from a combination of theories, including the routine activity theory and rational choice theory that suggest that people develop a daily routine and through knowledge of such a routine, police can identify key nodes for offenders in certain locations. This is helpful in suspect prioritization and patrol saturation.

Ratcliffe claims that while GIS is evolving rapidly and is a crucial element to law enforcement intelligence, agencies are not devoting enough time to training their officers and analysts. He believes that while the number of agencies using it is increasing, many still do not understand its importance and application to policing and are sticking to the traditional policing techniques that they are familiar with.

Critique:
Ratcliffe's article effectively demonstrates the important of geographic information systems application in law enforcement. The identification and explanation of three aspects of crime mapping was beneficial and their usefulness in the field was evident. He explicitly mentions that geographic profiling produces a map of risk which demonstrates visually the likelihood of criminal activity, the main purpose of intelligence analysis. Through crime mapping, risk can be reduced for a decision-maker.

The author states many limitations to GIS, however. Hotspot mapping has issues with points that overlap, human inability to define clusters and the difficult of establishing broad trends. Some of these concerns are reduced through additional extensions of GIS programs, but the issue of data overload is nevertheless cumbersome. Additionally, geographic profiling is believed to have limitations for some offender types which may have negative implications for risk reduction. Among these were implicit limitations as well, including GIS's ever-evolving nature which makes it difficult for analysts to continuously learn the updates and for new practitioners to enter the field.

While Ratcliffe's article was useful, he redirected to many outside sources rather than including the information within the actual article which made it seem somewhat incomplete. Elaborating further on the three applications of GIS, offering potential solutions to issues in training and explaining the limitations further would have solidified his argument.