The purpose of this paper was to apply a Bayesian approach to monitoring changes in the risk of being murdered in the 13 regions of Namibia over time.  Utilizing murder data between 2002 and 2006, Neema and Bohning developed a Bayesian model to assess the chances of being murdered over time in the regions. Data was gathered from uniform crime reports in the Department of Crime Information Unit (CI) of the Namibian Police.

Neema and Bohning incorporated various factors into their Bayesian model to assess which potential variable has the greatest impact on the likelihood of being murdered. The Bayesian model produced the following posterior mean estimates:

The rate of the overall risk of being murdered is 0.889 per 1000 people with a confidence interval of 0.72 to 1.083 when no random parameters are included in the model. Additionally, the study concluded that regional clustering resulted in the greatest amount of variation in the relative risk of murder (σ­u=0.683). 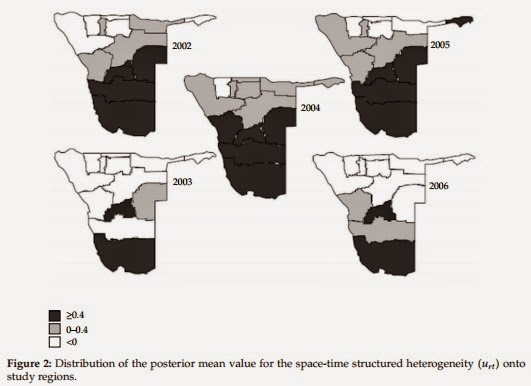 The results of the study revealed that the greatest amount of variation in the relative risk for murder was due to regional clustering, and that population density was insignificant.

This study properly used a Bayesian model to identify the bounds of the relative risk for murder in Namibia; however, the Bayesian model was not used in a predictive context. Rather than predicting the relative risk for murder in the future, the study was used to identify the key factors that may be contributing to murders. Also, this study did not provide a great deal of evidence supporting its findings. The Bayesian model produced mean estimates correlated to factors, but Neema and Bohning did not provide any further support for why regional clustering attributes to a higher likelihood of being murdered.