Kovalerchuck's research aimed to highlight how and when certain types of visualization techniques should be used.  From an intelligence perspective, visualizations should not often not used to their full effectiveness as they are often presented to present a great deal of information to the audiance.  Take for example many of the info-graphics seen in newspapers.  These info-graphics often are quite colorful, look professional, and give the reader a great deal of information.  Kovalerchuk states that these should not be the types of visuals that analysts use with their decision makers.  Kovalerchuck identifies two main purposes of data visualization techniques for intelligence professionals; discovered relations/pattern (DRP) visuals and decision making model (DMM) visuals.

1) DRP Visuals
DRP visuals help the analysts in his or her analysis of the situation.  These are often referred to as exploratory visuals.

2) DMM Visuals
DMM visuals assist decision makers in making decisions.  These visuals are often more simplified than DRP visuals and should create a clear image of what the issue is and lead to ideas on how to address the issue in question.

A DRP visual will guide the analysts to create the DMM model.  The key finding of Kovalerchuk's research into data visualization techniques is that decision makers are comprehend and make better decisions from visuals they are most familiar with.  Examine the following image, 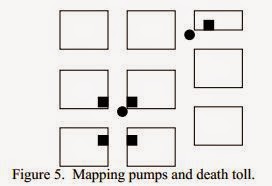 This simple image shows the relation of human deaths (black squares) next to water pumps (black circles) in relation to city blocks.  The deaths all occurred in close proximity to a water pump.  This is an overly simplified geospatial analysis that most analysts are familiar with.  Decision makers may not be familiar with this technique and have to think more about what the visual means. 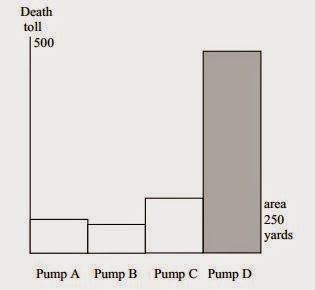 This is a bar chart image showing the death toll within 250 yards of certain water pumps.  A geospatial graphic could have been designed to show the exact same information.  Decision makers are used to seeing this type of chart.  Kovalerchuk found no disadvantages to using this type of chart over more complicated geospatial charts to present findings.

Critique:
I agree with many of the findings of this research paper.  I agree that, we as analysts should seek to offer visuals that help decision makers best make decisions.  It also makes a great deal of sense to me that showing visuals that decision makers are familiar with, such as bar and pie charts, would be as effective as showing them more complicated charts that analysts are used to.

My main issue with this research is that the author does not give any information into how he came to these conclusions.  It appears that he mostly analyzed literature on the topic.  Some of his statements though make it appear as if he did conduct human research on how visuals effect decision making.  I would be very interested to see a study on how decision makers comprehend advanced visuals usually slated for analysts (geospatial analysis) vs traditional data visuals (turning the content of a geospatial analysis into a bar or line chart).

Kovalerchuk, B. (2001).  Visualization and Decision-Making Using Structural Information.  Proceedings of International Conference of Imaging Science, Systems, and Technologies.
Posted by Unknown at 9:37 PM