Don’t Believe What You Read (Only Once): Comprehension Is Supported by Regressions During Reading

Summary
The authors assert that while recent web applications have spurred excitement around the prospect of achieving speed-reading by eliminating eye movements with rapid serial visual presentation, or RSVP, in which words are presented briefly one at a time and sequentially, regressions (re-readings of words) are a natural part of the reading process. Besides, they claim that the inability to regress affects comprehension negatively and it is not confined to ambiguous sentences.They believe it can be effective only when text is extremely easy or short.

In the study, they demonstrate this point with a very simple manipulation: Contributors of the experiment read sentences both normally and in a condition in which words became masked after they moved their eyes away (i.e., with what they refer to as a trailing mask). This experimental manipulation prohibits readers from accessing further information from the words after initially reading them, as in the RSVP method. Comparing comprehension of the sentences between normal reading and reading with the trailing mask allows them to assess how this lack of control over the sequence of the reading process affects comprehension.

Results
The results of their experiment demonstrate that readers’ control over their eye movements is important for their comprehension. Conditions in which readers cannot go back to reread words (i.e., in the trailing-mask paradigm and in the RSVP method generally) lead to poorer understanding of the text. The fact that this finding did not differ between ambiguous and unambiguous sentences suggests that this is a global effect, not confined to generally difficult language. 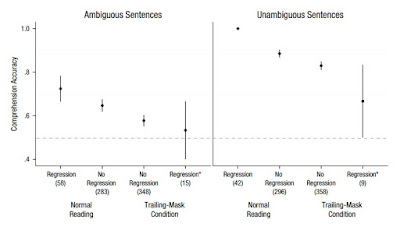 Fig.  Results are shown separately for ambiguous sentences (left) and unambiguous sentences (right). The number of observations contributing to each data point is presented in parentheses below the x-axis. Error bars represent ±1 SEM. The dotted line represents chance performance (.5).

Critique
Their data call into question how successful apps like Spritz will be in allowing users to read and, crucially, understand text via RSVP presentation. Although RSVP might be fine for reading short, simple sentences in which readers would not typically make regressions, given that readers normally make regressions 10% to 15% of the time, removing this ability will have drastic negative consequences for the understanding of sentences. Although there are several comments suggesting that people generally think of regressions as a “problem” that needs to be “gotten rid of.” In contrast, this study suggest that, regressions add a small amount of time to the reading process but the benefits they provide for understanding far outweigh the costs.