Effect of Binaural Stimulation on Attention and EEG 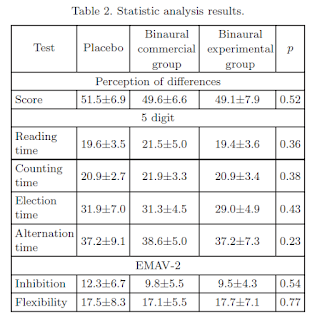 In group B the EEG revealed no significant changes between the three subgroups. A non-parametric
Kruskal-Wallis analysis of variance was performed but could not find any significant differences between the three groups for any electrode, band, or moment of stimulation.
Criticism
The authors admitted that their sample sizes may have been too small to accurately generate enough data to substantiate findings. Additionally, they acknowledged that the exposure to BBs may have been too short to allow the participants time to acclimate. Finally, they speculated on the use of pink noise alongside the BBs within the experiment as a potential variable that could have disrupted the results. I agree that any of the three criticisms could have been a factor in the findings. I was also curious about the exclusionary criteria between the two groups. I’m unsure as to how being right or left handed impacts an EEG reading and why the authors decided to limit one group to left handers and one to right. Finally, I found the participant pool to be too varied for my taste. If I were to conduct a neurological experiment I would want my focus groups to be as similar as possible in age to limit the impact time has on brain function. The participants history of participation in contact sports along with medical records of any previous head trauma would also be valuable knowledge to possess. As would knowledge of the participants history with drugs and alcohol.
This study is easily re-producible and with a few altercations as suggested above could prove to be a valuable addition to the field of study. As it is currently, I’m not sure the findings which suggest BBs do not improve concentration or alertness are backed by enough data to hold any significant weight in the current field of study. More research is necessary before binaural beats can be efficiently categorized in terms of their effectiveness.
Source:
Crespo, A., Recuero, M., Galvez, G., & Begoña, A. (2013). Effect of binaural stimulation on attention and EEG. Archives of Acoustics, 38(4), 517-528.
Posted by Unknown at 5:02 PM