This journal article uses a fuzzy set theory and Monte Carlo Simulations to model and evaluate uncertainty and risk to a benzene extraction unit (BEU) of a chemical plant in India. They first described the situation that risk plays to many industries, and then went into a literature review of studies using Bayesian Network analysis, and other methods used to reduce uncertainty in analysis. 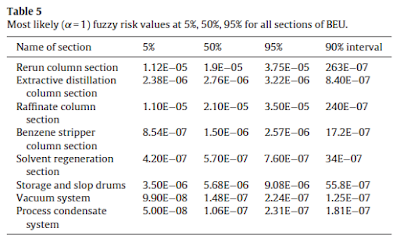 Table 6 Most Likely Value of Risk 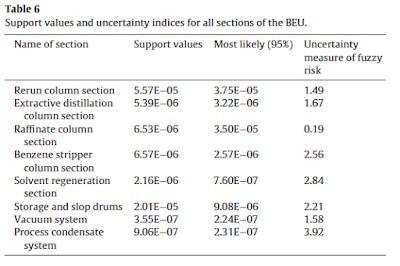 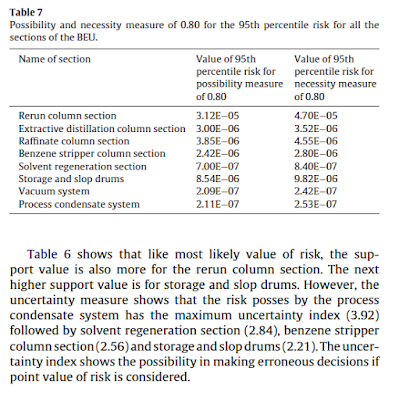 In conclusion, the scientists acknowledge that evaluating a point risk is difficult and has serious limitations for decision makers. Yet, the use of interval risk values that use variability and estimation reduce the uncertainty for a decision maker. With the use of the 2D FMCA, it uses two forms of uncertainty assessment models, which are the combination of fuzzy set theory and probability theory. The 2D FMCA method reduced more uncertainty than any of the other methods described in the literature review of past studies, making it a stronger piece of support to aiding a decision maker’s capabilities of making the right decision, particularly in regards to the BEU. Which for the BEU the uncertainty index showed the highest degree of uncertainty for the process condensate system, followed by the solvent regeneration section, benzene stripper column section, and lastly the storage and slop drums when put against the high risk sections (See Table 7 results).

Due to limited knowledge on the topic of MCA and the resultant other theories used in this piece, I would say the track record for MCA is credible in being able to reduce uncertainty. This is assuming that the person doing all the mathematical equations behind it knows exactly what they are doing. I found it interesting that like intelligence the chemical sectors try to keep their failures from happening for like intelligence their failures are known not their successes. For the researchers acknowledged that finding backing data for their study was difficult to obtain. I personally think the article was well rounded in that it evaluated all methods before going into the methodology section that the researchers selected. It allowed one to see and compare, and MCA by my understanding and by the researchers results proved the better method to reduce uncertainty, particularly if it is for a decision maker.