Summary and Critique by Samuel Farnan

University of South Florida researchers Douglas Nelson and Cathy McEvoy along with University of Kansas colleague Thomas Schreiber set out to gather what is the largest data regarding free association by using more than 6,000 participants that produced close to a million different responses to roughly 5000 stimulus words. Ultimately, offer 72,000 word pairs along with numerous other statistics and data points to aid in research of word association, for free.

The authors propose that free association can be useful to researchers for several reasons. They stipulate that "Free association norms offer a means for constructing maps of the lexical knowledge that is most accessible to people sharing a language and a cultural heritage. Understanding the organization of word knowledge continues to be a significant problem". Additionally, free association and the data it gathers can be utilized for linguistic analysis via categorization for future retrieval. Furthermore, free association research can be used for indexing and evaluating semantic representation.

Below is a sample of the results. 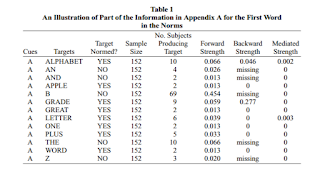 Despite collecting one of the largest, if not the largest data set on word associations, the authors admit that free association has its limitations. For example, free association provides a relative index of strength versus an absolute measure. The authors say that although "read" is produced by 43% of participants for the cue "book", this does not show how strong this response is in an absolute sense, only that it is stronger than "study" that was only 5.5%.Finally, although not a fault of the method itself, the authors hypothesize that free association may produce different results across various regions. They write that "associates to apple may be different in Florida than in other locations where apple trees and traditions of apple pie and picking apples are more frequent. Although Floridians know about apples, many have never seen or climbed a real apple tree, and their most frequent response is red, with tree and pie given infrequently".

Free association in the sense it was studied above, is useful for creating potentially large visual maps of word associations relatively quickly, despite the difficult work and large amounts of participants needed. However, their criticisms are on point in that words in different regions may be associated with different things. This problem can also be magnified with people who speak a language that isn't their primary language. I believe in order for this to be utilized as an intelligence method, this would best be employed either by linguists or social media analysis. The above study is in my opinion a highly respectable exercise in data collection versus actual analysis.