Effectiveness of a worksite lifestyle intervention on vitality, work engagement, productivity, and sick leave: results of a randomized controlled trial

Summary and critique by: Ian Abplanalp

In a study conducted in 2013 a group of Scandinavian scientist held a study that studied worksite health style intervention techniques as a means to prolong workforce participation. This study measured four components vitality, work engagement, productivity, and sick leave.

The study invited all individuals from two different academic hospitals as long as they were above 45 years of age, and worked more than 16 hours a week. The participants were randomized into two groups a control and an intervention group, both groups received pre-trial health measurements which were controlled for.

Both groups were presented with literature about healthy lifestyle, while the intervention group was introduced to 6 month vitality practice. Vitality practice can in the form of meetings that occurred three times a week, and were led with by a wellness coach. The wellness meetings were broken into three different types, one consisted of a yoga session, one aerobic exercise class, and a meeting with a wellness coach. Each meeting type took place once a week, and participants were asked to perform 45 minutes of exercise of the same caliber of the fitness meetings outside scheduled meetings per week. The participants of the  intervention group were provided with free fruit at the end of workout session. Research design and drop out information can be seen in the figure below. 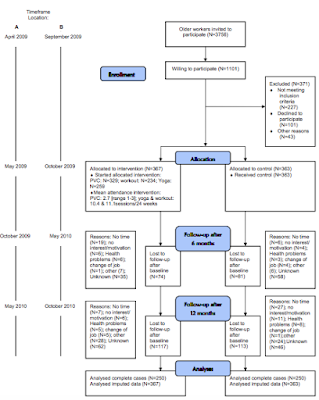 The intervention group showed no adverse side effects to being subjected to the exercise regiment. However, despite their effort there was no statistical significance to the individuals in the control group across vitality, work engagement, work leave and productivity. Intervention participants did show a positive trend improving their vitality scores by 1.9 compared to the .10 of the control group, but this was not statistically significant. Both the aerobic and yoga subgroups showed this positive trend of improving workplace vitality, when used in high compliance (sticking to the assigned workout program). Yoga showed a stronger positive trend to improving workplace vitality, than aerobic workouts, yoga showed its strongest correlation when used in conjunction with aerobic exercise.

While the article discusses the lack of statistical significance of the intervention I would argue that a qualitative study follow up with the individuals would add more nuance to research. It would allow for a deeper understanding of what intangibles led to a positive trend in the intervention groups vitality, to better construct future research. The time span of the study was also very short for looking at the given problem of extending the workforce participation, only going on for a year. As well as the study was only conducted on older individuals, it raises the question of if implemented over the course of 20 years since being a young employee how would that effect the variables instead of just a one year time frame of older adults. However the article did a good job, albeit unsuccessfully, of beginning to answer a complicated question of how extend the lifespan of the workforce.