A Bayesian Approach To Modeling Binary Data: The Case Of High-Intensity Crime Areas

Summary
The purpose of this paper is to apply Bayesian logistic models to binary data in order to explain how high-intensity crime areas (HIAs) are distributed in Sheffeild, England.

The article defines an HIA as an urban area experiencing high levels of violent crime. Perpetrators of crimes in HIAs often reside in the neighbors where they committ crimes, resulting in high levels of witness intimidation making it difficult to identify an HIA with full accuracy.

The article argues that Bayesian approaches are useful for spatial data analysis because of its emphasis on randomness, prior beliefs about values, and WinBUGS software that enables analysts to test hypothese with spatial elements.
Prior to using Bayesian analysis, Sheffeild was divided into Basic Command Units (BCUs). Within the BCUs were HIAs. Within both BCUs and HIAs were Enumeration Districts (EDs). EDs were then classified in terms of if they were in an HIA or not. According to the article several EDs were miscategorized because the original statistics used the standard logistic model, that did not analyze the spatial relationship between EDs. The article continues by discussing the use of Logistic Regression with WinBUGS software, to analyze random elements and spatial analysis to redesignate the EDs. 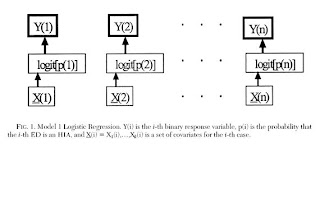 Figure 1, shows what is known as the logit function, including random effects. However it does not include spatial relationships of EDs. 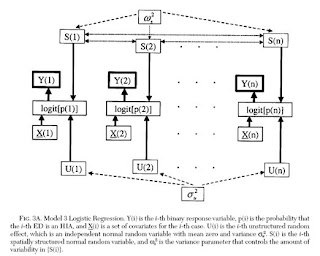 In Figure 3A spatial relationships are shown with the links to W which is known as the contingency matrix. The contingency matrix is used to show the likelyhood of EDs neighboring HIAs and being at risk of spill-over crime from the HIAs making the EDs likley to become HIAs.
The paper's conclusion is that using a three stage Bayesian hierarchal model, can give estimated probabilities of EDs being HIAs, because it takes into account spatial elements between EDs. The paper also argues for "map decomposition" as another relevant way for analyzing spatial models along with Bayesian hierarchal models.
Posted by Brent at 7:14 PM