For those of you who were in Freyn’s competitive class last term, you might find this study amusing. It deals with water related infrastructure (a topic we are all well versed for having taken that class) and applies a decision tree matrix methodology to the nature of water related failures in these systems. It was quite interesting if only for the fact that I love the idea of applying advanced analytic methodologies (and hopefully one day softwares) to real life problems (in this case, the aforementioned water infrastructure).

This study looks at the role that valves which connect and control water flow in pipes plays in the reliability and security of a water infrastructure system- for example, a municipal water grid delivering potable water to a town. The study wanted to look at the nature and impact of a failure at certain points in the grid and enumerate all the possible valve failure combinations and corresponding events that would likely follow. The study looked at three overall systems for examining this phenomenon: 1) a segment-valve matrix, 2) a simulation and 3) decision tree analysis. For the sake of this post I’ll only focus on number 3. 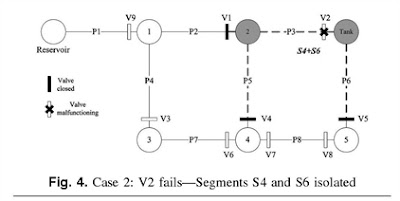 What this study really found out was that probability is everything and that potential for failure was extraordinarily high. The example water pipe network had a total of 849 valve failure combinations despite the fact that it had only 8 pipes, 7 nodes, and 9 valves. When applied to a real live city the potential for failure increases greatly.

This study compares the different types of analysis in the chart below:

The authors state “Decision tree analysis yields the expected values of customers without services exactly…” In addition, that the decision tree method can be used to evaluate the expected number of customers losing services based on the current configuration of a city’s water system. This is highly applicable to real life, say the authors, as it can be used to establish a regular valve maintenance program to target the most critical valves, pipes and segments in a city’s water supply system.