Developing Consciousness in Organizations: The Transcendental Meditation Program in Business

Summary:
The change in the structure of the business world can be attributed to a number of things, one of which is the human psyche.  The authors of the article "Developing Consciousness in Organizations: The Transcendental Meditation Program in Business", look at the potential benefits of using Transcendental Meditation to improve the work place.  Schmidts-Wilk, Alexander, and Swanson (1996) looked at the concept of consciousness, particularly in the business place.  The authors review existing literature in terms of the application of Transcendental Mediation on both individuals as well as the overall work place structure.

Productivity of people who practiced Transcendental Meditation was measured and looked at in both retrospective studies as well as prospective studies. This was accomplished through surveys where individuals, both practitioners of meditation as well as non-practitioners, self-reported on a number of factors including job satisfaction, performance, and various relationships in their workplace.  Once the results were analyzed, the research found that individuals who meditated had a statistically significant reports of greater satisfaction at worm compared to non-meditating individuals. Schmidts-Wilk, et.al. determined that the four case studies observed demonstrated that the development of consciousness was beneficial in the work place, and that Transcendental Meditation was one way to accomplish that. 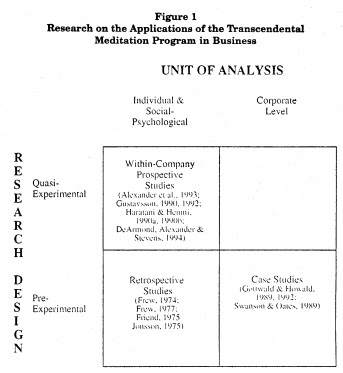 Longitudinal studies were conducted in corporate settings.  Due to the subject of the study, quasi-experimental designs were employed.  Overall, the organizations were more productive when their employees developed a consciousness, which can be obtained through Transcendental Meditation.  Not only were the individuals more productive and had better relationships, but this moved over into the overall functioning of the organization.

The authors of this study looked at a number of different previous studies and their findings, both as applied to the individual as well as applied to a larger organization, such as a business.  One element discovered in this experiment was that business functions can be improved through means outside of outside structural change.  The application of Transcendental Mediation is one way in which this can be improved on a more internal level.

Critique:
The authors of this study acknowledged that there were some shortcomings to the approach taken from the various studies.  Particularly the self-reporting that was done by the subjects, though the results of the quasi-experimental approach and standardized questionnaires were consistent with the self reporting.  This consistency increases the confidence in the surveys done.

While the studies did indicate that there was an improvement in the development of consciousness, it did not seem to take any push-back about mediation into account.  Individuals who may be told to participate in meditation are less likely to have the same positive response as the individuals who want to participate.