A number of research conducted in recent years have illustrated the benefit of meditation and mindfulness training. Variations of meditation methods share a number of key components including body relaxation, mental imagery, and breathing practice. This research focused on integrative body-mind training (IBMT) that allowed for high degree of awareness of body and breathing rather than focusing on efforts to control thoughts.
The participants were provided brief instructions on the method. A coach and a compact disk guided them to achieve a balanced state of mind. 40 random Chinese undergraduates were assigned to an experimental group and another 40 were assigned to a controlled group. Both groups did not have prior training experience. Both groups conducted training for 5 days, 20 minutes per day. The experimental group was given a short term IMBT and the control group was given a relaxation training exercise. Both groups were given tests one week before the training and immediately after the final session. These tests included Attention Network Test (ANT), the Raven’s Standard Progressive Matrix, and the Profile of Mood States (POMS). A computerized attention test was used to measure orienting, alerting, and the ability to resolve conflict. 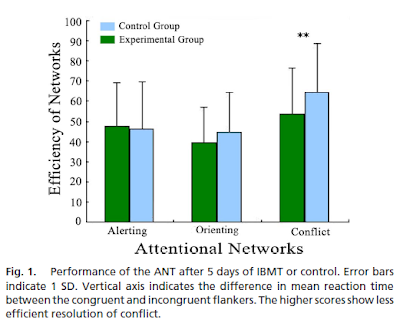 The results indicated that experimental group improved executive attention significantly after 5 days of the short-term IBMT exercise compared to the control group. Based on results from the POM exercise, the researchers concluded that the short-term IBMT enhanced positive moods and reduced negative moods. In addition, the Raven score also improved post IBMT in the experimental groups and only marginally in the control group. Also, the experimental groups were able to reduce mental stress after the exercises. Researchers concluded that IBMT improved attention and self-regulation.


Critique:
I enjoyed reading about this study because the paper is well written and the experiments were conducted very well. The authors explained their thought process for each stage of the experiment. A number of efforts were taken to certify the validity of the study. Some of these included the random selection of participants for the experimental group as well as the control group and used objective/standardized tests with researcher blind to the conditions. The authors help understand the results by providing possible reasons for why IBMT worked after only a few days of practice as oppose to other methods that require longer training periods. The only limitation of this article is that although