Summary
Dr. Gladman explores the importance of red teaming, organizations and methodology, the composition of the red team, and the process of red teaming. He presents a description of red teaming, acknowledging that the concept of a red team manifests itself in many forms-- "In general, red team efforts, both devil's advocate and 'opposing force,' can help hedge against surprise, particularly catastrophic surprise, through their challenge function that provides a wider and deeper understandings of potential adversary options and behaviors, and can expose potential vulnerabilities in friendly strategies, force postures, plans, programs, and concepts. Red team efforts can also help organizations to avoid biases and the tendency to accept the typical assumptions and solutions to problems" (Gladman 2007). The traditional opposing force role can uncover how human adversaries may threaten the system, but Gladman asserts that considering the impact of an event like and earthquake necessitates the other type of red team role--devil's advocate. Modeling this type of adversarial event is an important function of a red team. HE also distinguishes between opposing force red team and risk assessment wherein the former assumes the adversary and situation is unknown and in the latter the threat is already known. However, Gladman states that we cannot completely separate the two.

The Importance of Red Teaming
This section served as a history lesson in red teaming, citing its use back to the early nineteenth century with the rise of the Prussian General Staff with Kriegspiele or war game. Gladman goes on to discuss how important it is for red teams to avoid group-think (the red team all getting on one track and thus failing to present diverse, original scenarios) and mirror-imaging (the red team presenting scenarios in a 'this is how we'd act if we were them'"). To fight these tendencies, he suggests assigning a critical evaluator to each team member to foster an environment where they can voice objections and attempting to understand the specific nature of the operating environments complexity and the capabilities of the adversary, respectively.

Organizations and Methodology
Gladman addresses the importance of culture and asserts that a direct reporting relationship to the commander or head of the lead agency is critical to the red team's success or failure. Additionally. the red team must engage in continual sharing of relevant information and findings with teams at each command level. The red team must be seen as a critical and legitimate part of the planning process, have freedom to challenge areas where they detect problems, and must be logically organised and applied at critical times during the study. Gladman (2007) writes that ideally, "there is robust interaction between, initially, the red and planning teams, and later between red and blue teams during pre-event exercises. Both teams must view this interaction as a 'win-win' versus a 'win-lose' prospect." This results in sharper skills and greater application. At this point he also highlights the importance of clearly understanding the mandate and its expected outcomes.

Composition of the Red Team
Personality and subject matter expertise are both important to consider when selecting members of a red team. Someone may be professionally qualified, but they lack the temperament required for the task. He suggests some key team members e.g. a policy advisor (POLAD) to advise on policy issues and maintain a range of contacts across government departments, a team facilitator, to coordinate team discussions and identify assumptions and biases, and a Operational Research and Analysis (ORA) member, who helps decision-makers improve the effectiveness of operations or systems. Members must continue to learn and adapt, while being able to present their recommendations in a way that ensures appropriate attention. Gladman discusses how experience shows red teams often fail because they don't that the assignment seriously or don't have adequate exposure to the planning staffs and documents.

Process of Red Teaming
Gladman includes the this image, highlighting different functions (planning assumptions as "devil's advocate", developing "vignettes" or scenarios prioritized for impact and degree of risk, and carrying out exercises in the "opposing force" role, and finally assessing lessons learned) of the red team and how it leads up to the 2010 Vancouver Olympics. 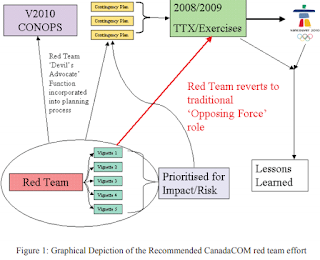 Next he discusses useful tools for red teaming e.g. capturing thoughts and ideas, brainstorming and simulation software, and the matrix included below. The matrix assigns a level of risk (Low, Medium, High, Extreme) at the intersection of severity if it were to occur and likelihood of its occurrence.

Gladman maintains that red teaming can create a mental framework much better prepared for the unexpected.

Critique
Gladman wrote that the paper's central argument was that, "military organizations which more easily welcome the challenging of assumptions and plans frequently fare better in the operations they undertake than those that do not." I didn't get a clear sense of that as much as I got a clear understanding of red teaming elements. After reading the paper I certainly think that's true, but I don't think it came through as the prevailing argument. Structure aside, I liked his idea of facilitating a win-win atmosphere. Instead of having the red team try to outwit the blue team or the blue team try to outplan the red team, he presented it as more collaborative. The red team's primary job is to provide the adversarial scenarios alongside the blue team, resulting in greater preparedness. It was also interesting to see him include devil's advocacy in the two-part role of a red team and also to read about the importance of direct communication with command. Additionally, I believe this was my first exposure to the Risk Assessment Matrix and I'd like to keep it in mind for future analyses. I like how it puts a structure behind the judgement. Overall, Gladman's paper was informative and extensive, providing useful explanations and direction.