Introduction:
The author, Robert Litchfield, set out to see if rules assigned to brainstorming groups increased or decreased the volume of idea output. He found that “brainstorming rules alone do not convey an advantage over even a vague quantity goal presented alone for enhancing the number of ideas generated in to common tasks.” On the contrary he found that “evidence…that brainstorming rules are useful adjuncts to specific, difficult quantity goals.” Translation: whether or not you to people to brainstorm up X number of ideas doesn’t matter; they’ll always disappoint you no matter what.

Summary:
This paper consists of two studies. Study 1 requested brainstormers to generate 30 ideas in 10 minutes regarding this question: If everyone after 2006 was born with two thumbs on each hand and all of the original fingers, what advantages would that give the person? Participants in Study 2 were told to generate any amount of ideas in 10 minutes surrounding the question, not specifically 30. 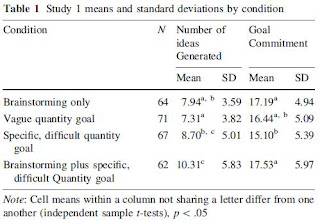 In the first study there were 4 separate groups. The first group used brainstorming and only brainstorming (standard rules apply), the second group was with vague quantity goal (produce as many ideas as possible), the third was with a specific but difficult quantity goal (30 ideas in 10 minutes), the last group was with both standard brainstorming techniques and the specific but difficult quantity goal.
The result: the goal of 30 was not achieved in either group. The highest number of ideas was 25. Their results looked like this: (Where n= the number of participants in each group.)

The second study used nearly identical but recreated the “hanger test” used by Gerlach in their study in 1964. These results were much much more interesting. As the charts below show, the range in the number of ideas were higher in groups that needed to produce specific quantities of ideas. The role that ‘brainstorming rules’ played was also quite interesting. The presence of brain storming rules and the presence of a quantity goal produced nearly equal quantities of results while the absence of brainstorming rules and the presence of quantity goals produced equally high results. 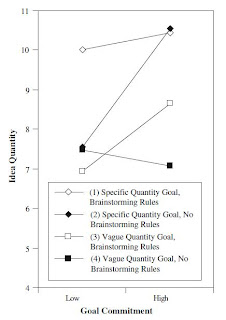 Conclusion:
The whole test can be summarized in this table: 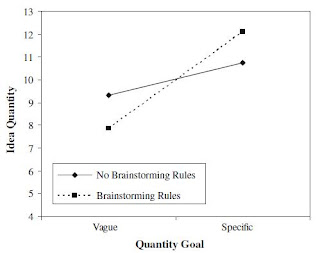 There is a time and a place for brainstorming rules. They do play a very active part in volume idea creation. Also, a known goal in a time pressed situation plays an equally important role. The two combined performed the highest in both studies. This says nothing of quality, only quantity. If you’re trying to pump out new ideas, this is certainly the way to go.