Introduction:
Ryan Pettit’s paper on the economic impacts of highway bypasses on communities in Iowa uses trend analysis, including economic trend analysis, to determine if the change from highways going through the middle of town’s central business districts to bypasses to move traffic around the edge of the city impacted the revenue to businesses.


Summary:
The research evaluates economic and population data from prior, during, and after the construction of the bypasses for four communities in Iowa. The economic data consists of retail sales, number of firms, and pull factors all which provide a good look at the economic characteristics of a community. The analysis of the trends with completion dates, allows the researcher to assess the community impact. The data was then compared to four control cities with similar population and location, but was not bypassed.


The retail sales, number of firms, pull factor, and population data for the report was gathered through the Office of Social and Economic Trend Analysis. The researcher also visited the bypass communities to gather HUMINT from community leaders and business owners. 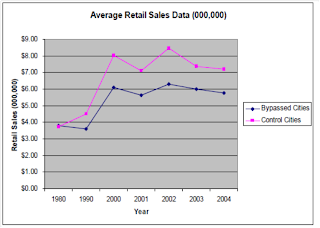 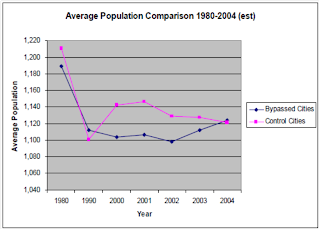 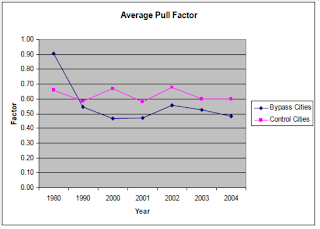 Conclusion:
This report shows that bypasses are not the likely reason for negative economic impacts felt by small communities. Overall the communities do not blame the bypasses for the decreases in business, but credit them for having removed traffic, congestions, and pollution from the towns.
Source:
Pettit, R. (2007). Economic Impacts of Highway Bypasses on Communities in Iowa. Midwest Transportation Consortium. Retrieved from http://www.ctre.iastate.edu/mtc/papers/documents/pettit2007paper.pdf