Game theory is a specific model of thinking that uses precise logic reasoning to solve problems. It is used to help understand situations in which decision-makers interact. Osborne (2000) provides an excellent introduction to game theory, focused more on the ability to follow logical processes than mathematical reasoning. Game theory involves using models to simplify transform reality into an abstraction which is more easily analyzed or understood. Most models are based on a set of actions available to decision makers, and assume that decision makers are rational actors, meaning that they will always choose the most preferred action. Game theory works best with a finite action space and a specific set of rules for the environment.

Basketball is an excellent example of a zero-sum game, with two actors, or teams, both pursuing the same goal, victory. This is zero-sum because one team’s victory means the other team’s failure. In these game’s the coach’s only objective is to win, but he or she must juggle a number of factors to do so. Certain situations within basketball provide great opportunities for game theoretic analysis. In this paper, two of these will be evaluated. In the first, I look at the classic issue of foul trouble. Conventional wisdom is that players should be immediately benched, but using game theoretic principles, this assumption can be questioned. In the second situation, I modeled an end of game situation where one team trails another by two points with less than 20 seconds left in the game. This time crunch shrinks the options available to either coach, and forces them to choose to shoot or defend, respectively, the two or three point shot. I assigned payoffs and calculated a mixed strategy equilibrium for both the offensive and defensive teams.

Star players often give the team a better chance to win, and their playing time should be maximized. One factor which reduces the playing time is fouls. In the National Basketball Association (NBA), a player can commit at most six personal fouls before he is disqualified from the game. Referees govern fouls according to the rules set down by the NBA. Coaches may sit their star players for an extended period of time if they feel that their number of fouls puts them at risk for disqualification from play. Maymin et al. discuss this problem from a resource allocation standpoint that addresses strategic idling. “The advantage of yanking is that the starter will likely be able to play at the crucial end of the game but the disadvantage is that he may not play as many minutes as he otherwise would. On the other hand, if a starter is kept in the game, he may not play at his full potential, as the opposing team tries to induce him to commit another foul” . Conventional wisdom says that the threshold for acceptable fouls is the quarter plus one: i.e. two fouls in the first quarter, three in the second, four in the third, or five in the fourth. As Figure 1 shows, NBA teams are very consistent when applying this rule.
This is a situation that does not apply to a strict interpretation of game theory, as there is only one actor, the coach, who has two choices: sit the star or play the star with foul trouble. Although the observer may believe that wins are the only thing that matters, they are not. The coach must also balance the desire to win with maximizing star player’s times, and keeping the fans happy. These must be balanced in such a way that the team and the coach and the star are all happy.  When handling foul trouble, the decision to bench the star may be consistent with winning the game, but as Weinstein observes, voluntarily benching the star for foul trouble is simply enacting the penalty the coach wishes to avoid.  This is the one situation that depends more on the quality of player (disparity between starter and sub) available to the coach; we will look at some specific examples of NBA teams.
In 2011, the average number of foul outs per game was 0.3153; I used this number as a proxy to estimate the possibility of a player fouling out given a threshold foul. Goldman and Rao show that the value of a point increases as the game wears on. In order to compensate for this phenomenon I gave quarters 1 and 2 a normal weight, weighted the 3rd quarter 1.5 times, and gave the fourth quarter 2 times the importance of the first. In order to evaluate the effectiveness of individual players, I used Wins Produced per 48 minutes, available at www.theNBAgeek.com/teams. At any state in the game, there are two particular states, not in threshold foul trouble, or in threshold foul trouble. Once a team’s star player enters the threshold foul trouble state, the coach has two choices. The payoffs of these are shown below for a number of different teams.  This functions as an iterated payoff matrix, where in each quarter, the coach should maximize his expected value.

Although it is unclear whether foul trouble drives performance or vice versa, it is clear that coaches are being too cautious with their players regarding foul trouble. The benefits of having your star player in the game out-weigh the possible drawbacks of his fouling out. This is especially clear because of the fourth quarter scaling. Although in the first three quarters, the drop off to the bench player may not be as severe, in the fourth quarter, these differences are magnified by the heightened value of a point as the amount of time left in a game nears zero.  This is even true for teams where the disparity in talent between starter and substitute is not drastic. For example, with the Oklahoma City Thunder, should Kevin Durant get into foul trouble in the fourth, the payoff of leaving him in to finish the game is much higher than his value on the bench. It just so happens that, for the Thunder, James Harden’s play has been great enough that the drop off, should Durant foul out, is not particularly problematic.

These results are consistent with findings from Moskowitz and Wertheim (2011), who found that stars actually play better in the fourth quarter with foul trouble. However, this is contrary to Maymin et al., who found that teams generally perform better if foul-troubled starters are benched. Both Maymin et al. and I agree that benching a player in foul trouble is more beneficial in the early quarters, mostly because early in the game, “benching a player preserves “option value” since the coach can reinsert a fresh, non-foul plagued starter back into the game in the fourth quarter” .

Often in late game situations, a team may find themselves up by two points with the shot clock turned off. In this situation, the offensive team must decide to go for the tie and hope for overtime, or shoot the three and win the game in regulation. Similarly, the defending team must decide which to defend, the inside or outside shot. For our purposes, it can be assumed that the probability of winning in overtime will be basically a coin-flip, or 50%, as there are too many variables to consider in our theoretical setting .

In this situation, most often the offensive team’s coach will call a timeout in order to set up his play. Simultaneously, the defensive coach must decide the best way to set his defense in order to ensure the win. This functions as a simultaneous game, where both coaches make their decisions without knowledge of the other’s strategy. Instead of using the data for actual players and teams, I used league averages for my base assumptions regarding the game. According to Weill (2011) tight defense drops expected shooting by 12%. Also, I found data for the effective shooting percentages from Peterson (n.d.) that I feel is representative of the open FG% (although all teams track contested and open FG%, this information is not yet available to the casual fan). 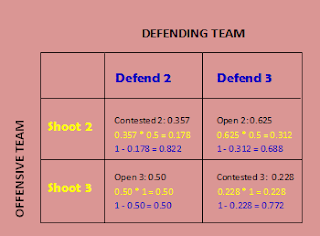 The simultaneous game offers no dominant strategy for either team. The teams should therefore employ a mixed strategy in order to remain unpredictable. In order to calculate the right balance of two and three point shots, the Mixed Strategy Equilibrium was calculated for each team.

This simplifies to q > 0.793, meaning the offensive team should always shoot the three if the defending team defends against the three point shot less than 79.3% of the time. The expected payoff for shooting either a two or a three in this case is 0.284.

This simplifies to p > 0.330, meaning the defensive team should always defend the three if the offensive team shoots the three point shot more than 33.0% of the time. The expected payoff for defending either a two or a three in this case is 0.716.

Implication: Simply put, it is likely in the best interests of the losing team to shoot the three almost all the time. As long as the defending (winning) team guards the three pointer less than about 80% of the time, the losing team should seek to end the game in regulation every time. Similarly, the team that is ahead should fear the three pointer much more than overtime. As long as the team that is losing shoots the three at least a third of the time, the defending team should always defend the three.
Unfortunately, often finding the best three point shot involves working the ball around and having someone other than the team’s superstar take the shot. In today’s NBA Culture, Hero Ball has often taken the place of team basketball in crunch time. The problem with this is that isolation plays are good for only 0.78 points per possession (ppp), as opposed to off-the-ball cuts (1.18 ppp) or transition plays (1.12 ppp). When star players do not take the last shot, or when role players miss wide open opportunities, the star is blamed for not taking the shot. However, this analysis shows that the three pointer, especially if the team is able to get off an open look, dramatically improves the team’s chances of winning the game.