This is a link to a video describing the findings and application of geographic imagery analysis.

Description:
Geographic image analysis is a technique used to identify terrestrial conditions or changes to conditions over time. It is a highly useful technique that allows users to quickly and easily identify conditions from satellite images. This technique is used in construction and development, city planning, environmental mapping, meteorology and military applications. In the exercise below, the author applied geographic image analysis to changes in the Pennsylvanian political landscape.

Strengths and Weaknesses:
Strengths
 Capable of being used in a wide variety of applications
 Very easy to quickly understand
 Multitude of programs available for this function

Personal Application of Technique:
For this exercise I decided to apply this technique to the Electoral College. I thought having the raw data of satellite imagery combined with the nuanced and heavy artificiality of the congressional districting process could highlight an element of absurdity in our nation’s legislative system. Essentially, I planned to investigate the historical and probable future employment of gerrymandering in the redistricting process.

Preliminary Research
For this I needed a few general things:
1. An understanding of redistricting policy in general
2. Old district maps to compare to the proposed district maps
3. Population density maps from the census
4. Age and political demographic maps
5. County voting records of past elections

After scouring various publications to try and make sense of the concept of gerrymandering I came across this general description: “The dividing of a state into election districts so as to give a political party the majority in many districts…” This suffices for a definition in a general way, and is often recognized as an acceptable definition in popular culture. However, how does a political party employ this tactic? There are three methods:
1. “Cracking”- the practice of splitting voters of the opposing political party into two or more districts in which they will be a minority.
2. “Stacking”- the practice of gathering as many voters for your party into a district, no matter how far apart they are, in order to outnumber opposition voters.
3. “Packing”- the practice of pushing as many opposition voters into a single district in order to quarantine them from the rest of the electorate.

By applying these three general types of gerrymandering to the historical election results, historical district lines and demographic information, one can observe interesting election trends. However, these are not the only tactics employed in the art of gerrymandering. Legislators with the power to redistrict congressional lines can also:
4. Redraw districts so that the existing congressman’s house is no longer in their own district, thus making them ineligible to run for congress in their district.
5. Redraw districts to put the homes of two congressmen from the opposing political party in the same district, thus ensuring a costly primary campaign.

Historical Case Studies:
The Case of Robert A. Borski Jr.
After the 2000 census Pennsylvania was due to lose two districts because of population stagnation. Robert Borski Jr. was elected to Pennsylvania’s 3rd District in east Philadelphia in 1982. The district remained intact for his 20 year tenure until 2002, when his district abruptly changed shape. Borksi’s home was drawn into Pennsylvania’s 13th District, in which incumbent Democratic congressman Joe Hoeffel resided. Borski chose to resign rather than force a primary runoff election.
Before: 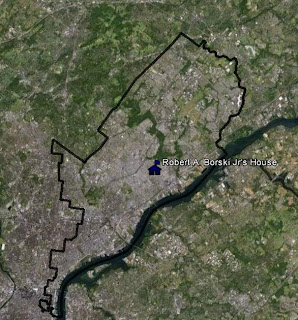 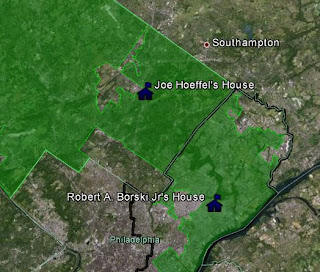 The Case of Tim Holden
At the same time that Robert Borski found himself in a new district, Tim Holden found his district changing. Tim Holden was elected to central Pennsylvania’s 6th District in 1990. He held the seat for a decade, winning congressional elections by comfortable margins. After 2000, Pennsylvania lost two districts due to population change. Holden’s 6th district was folded into the neighboring 17th district, controlled then by George Gekas. To many this was blatant gerrymandering, as it brought in more voters from the heavily conservative Harrisburg area to dilute the voting strength of the more liberal voters in Pottsville area. Gekas also retained 60% of his former district. However, the plan backfired and Tim Holden continues to serve the 17th District to this day.
Holden and Gekas's Districts: 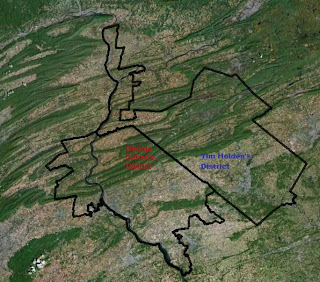 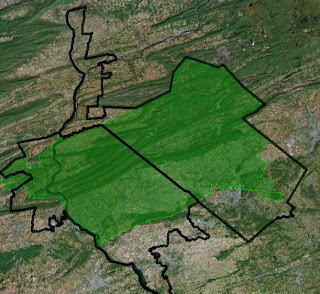 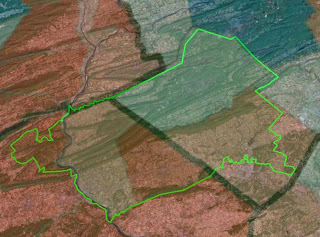 The Case of Frank Mascara
Frank Mascara won southwestern Pennsylvania’s 20th District in the 1994 election. He continued to win the 4 ensuing elections in the 20th District with ease. However, in 2002, Mascara’s district was redrawn and renamed the 18th District. This district contained much more affluent upper middle class areas south of Pittsburgh, likely giving an upper hand to any future Republican challenger. However, this was of little concern to Mascara because his house was drawn out of the new district by only a few yards, and his residence was placed in the same district as long serving Democrat Jack Murtha, forcing a lengthy primary battle which resulted in Murtha’s reelection.
Frank Mascara's District (before 2000): 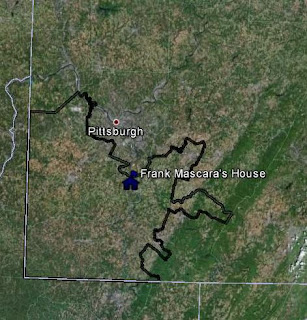 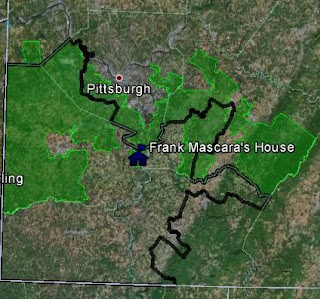 Mascara's House just outside the district: 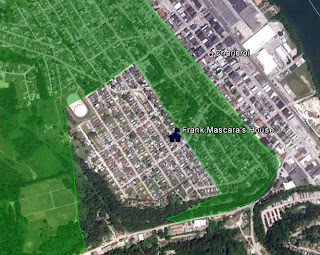 Post 2010 Census Case Studies:
The Case of Altmire and Crtiz
The 2010 census required Pennsylvania to lose two congressional districts due to population changes in the region. However, Pennsylvania’s 4th District (controlled by Jason Altmire) and 12th District (controlled by Mark Critz) were not eliminated, but instead were geographically adjusted. District 4 of the north Pittsburgh suburbs moved to south central PA, encompassing York and Adams counties, making Altmire ineligible to run for congress in the district. District 12 of east and south Pittsburgh shifted drastically to encompass much of Altmire’s former district, including his home. Because of this change Altmire and Critz, both of the Democratic Party, were forced into a primary runoff against each other.
Mark Critz in the old 12th District: Altmire In the old 4th District: 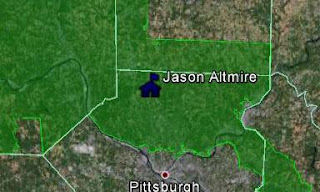 The Case of Erie County
Pennsylvania’s 3rd District, currently controlled by Republican Mike Kelly, is undergoing moderate changes after the 2010 census. Although the region hasn’t changed much in terms of population fluctuation, the district will change shape for the 2012 election. The new district will extend slightly further south and will not reach as far to the east. Erie county will be cut in half and the voters split between District 3 and District 5. District 3 is already a Republican stronghold and is likely to become much stronger. Erie county, the only county in the district that had more than 50% of its votes go to Barack Obama in 2008, will be divided between Districts 3 and 5, diluting the influence of these Democratic voters in future elections. 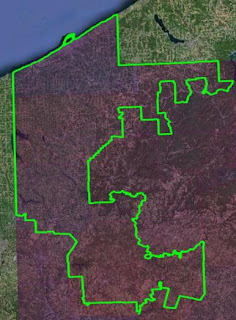