The authors of this paper employed social network analysis as a way of better understanding how gangs operate and assist police in allocating their resources.  The researchers developed two research
questions (Gunnell et al., 2016):

1   1.. What can social network analysis tell us about gangs?

2. How useful are the social network analysis outputs for the police?

The network began with 5 individuals who were known by police to be gang affiliated.  The researchers followed the following steps to construct their social network (Gunnell et al., 2016):

1             1. Researchers collected police intelligence data on the 5 gang-affiliated individuals dating back 6 months. These individuals were the “primary individuals” for this research.

2            2. Any secondary individuals mentioned within the data were identified

3            3.  Relationships between primary and secondary individuals were coded

According to the authors, the analysis produced a network of 137 individual nodes that included a previously unknown link between two gangs.  Although not all of the individuals within the social network analysis are gang members/criminals, it provides police with knowledge of those who may be at future risk of gang activity. 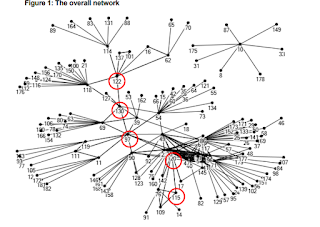 The individuals circled in red are the original five members who are known gang members (Gunnell et al., 2016).

Critique:
I agree with the authors when they state that social network analysis can provide a solid framework of understanding a groups structure when little is previously known.  They also state that it can remove bias in constructing a network because little experience related to the targeted group is required to populate the data.  From the framework of anonymous nodes constructed by the authors, it is easy to see how analysts can build a very detailed network by including photographs, personal data, etc.