Summary:
This paper introduces how to use the Analytic Hierarchy Process (AHP), a famous method that is part of the Multi-Criteria Decision Making process (MCDM). AHP was created to solve issues when facing a mix of qualitative, quantitative, and conflicting factors in the MCDM process. AHP uses the judgements of decision makers to form a decomposition of problems into hierarchies. Each section is further broken down into different levels within the hierarchy which combine with the decision maker’s problem that needs to be solved. The hierarchy is used to derive ratio-scaled measures for alternatives, and the relative value that alternatives have against organizational goals and project risks. AHP contains 4 steps.

Step 1: Define the problem and state the goal or objective.
Step 2: Define the criteria or factors that influence the goal, and structure these factors into levels and sublevels.
Step 3: Use paired comparisons of each factor with respect to each other that forms a comparison matrix with calculated weights, ranked eigenvalues, and consistency measures. (See chart below for comparison matrix example). 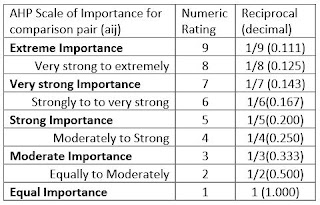 Step 4: Synthesize the ranks of alternatives until the final choice is made.

The paper used a family upgrading smart phones to present an example how AHP was applied to make the best choice.

Three smart phones were considered (1,2,3) and the four qualities that were evaluated were cost, display resolution, battery life and internal storage.

The first step in the AHP process was to build a table illustrating the problem and comparing each phones attribute.

The third step is the most complex part of the process and involves assigning attributes from the matrix shown below step 3. The authors compared each criteria and device choice using a computer algorithm to determine the value of each selection in a measurable format. The graphic below shows the results of the calculations. Without explaining the math behind equations, each family member rated the criteria of what was important to them, and averaged the numbers from the matrix. 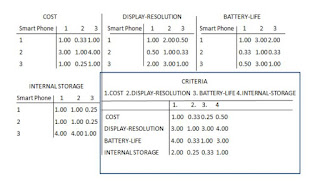 The results of the calculations above were further refined using mathematical equations. The chart below displays the results. The most important factor to consider is the Priority column which is the relative ranking of the criteria produced by dividing each element of the matrix with the sum of the column.

Step 4 shows the final rankings of the AHP process based on the Priority and costs benefit ratio to come to a conclusion on the best smart phone to purchase.

Critique:
The authors used SAS/IML statistical software to run the equations which I did not include due to the complexity of the problem. Nonetheless, I attempted to break down the AHP process by reducing as much technical information as possible, yet still highlight how the process works. When applying this process to intelligence analysis, one of the main problems that arises is assigning attributes to the criteria in a matrix. Because many of the issues analyst face are qualitative in nature, analysts may assign a high degree of varying importance to a piece of criteria. Nevertheless, this technique improves forecasting ability only when applied correctly, and can solve problems which have multiple scenarios.
Posted by Oleg melnik at 5:15 PM