Summary:
This article uses a combination of different techniques to assess the risk of forest fires in District Three of Neka-Zalemround Forests in Northern Iran.  The study uses a fire risk model integrated with the MCDM method in a GIS framework to map forest fire risk.  The authors claim that while there have been many fire risk models to incorporate GIS, none have used the MCDM method.  The model developed in the paper will be tested against the historical occurrences of wildfires in order to test its reliability.

The area under examination is in the Mazandaran Province in Iran, and covers an area of 153.07 km2.  The minimum altitude is 90 m above sea level, while the maximum is 820 m.  This is an area that has seen numerous wildfires in recent years.

The methodology being utilized consisted of four different components:

This study is using four major criteria (topographic, biologic, climatic, and human), which are made up of a total of 17 sub-criteria. 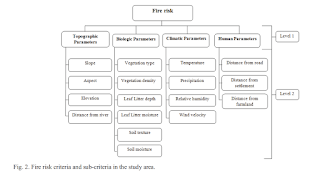 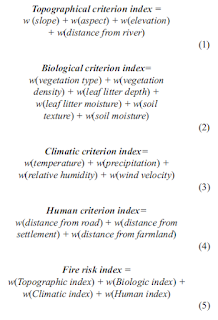 The maps were developed by using GIS spatial analysis and the raster calculator option in GIS.  The individual cells of the fire risk potential map have been ranked from very low to very high based on these calculations. 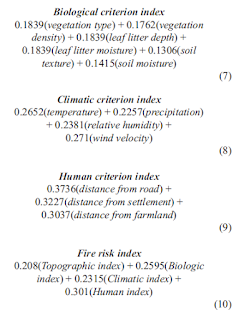 When the fire risk potential map is compared to the map of actual fires the model holds up favorably.  This indicates that the multi-criteria model they used has a good efficiency to predict future fires.  If it were to be used in other areas however, the weights would need to be changed accordingly. 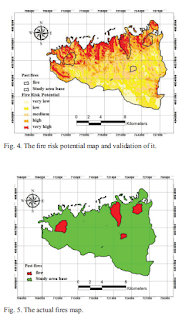 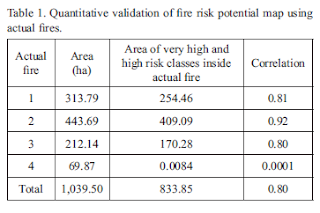 Critique:
This is a well laid out and carefully written article.  It does a great job explaining exactly what the authors did without being overly complicated.  My greatest concern involves the MCDM aspect of the study.  While their results were shown to have a strong correlation with real life fires, this is due to their criteria being properly weighted.  From what was in the article it seems like this would be difficult for someone without both a deep knowledge of the area and a talent for weighting that knowledge to replicate.