This technique helps generate ideas. In this example, this technique helps establishes a vegetable collection system. The analysts set up a table and incorporates the vegetables and options by collating them into a single matrix. This set up helps analyst see all of the ideas together. When building the table analysts should, “try to reduce the number of generated ideas from the lateral thinking diagram into those that really are the most suitable.” The table will help the analyst visualize the various systems that will combine to the final product. 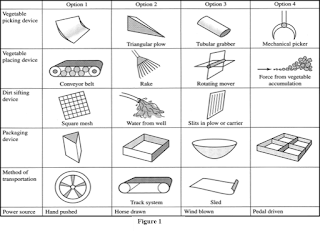 Figure 1 is the Morphological Table for a vegetable collection system. This chart shows how the Generated Alternatives are formed into a matrix with images to help supplement the variable. Analysts then begin to formulate a path in order to develop a design or scenario. This step is depicted by Figure 2. According to the author, analysts are now at a stage to begin concept design. For starters, “the first few concept designs should follow different routes through the Morphological Matrix, that is why you have compiled it. Do not ignore it. In this instance;”
Concept 1 could be – scoop > conveyor belt > water from well > bowl > track system > wind blown
Concept 2 could be – triangular plow > rotating mover > water from well > wheel > hand push
Concept 3 could be - scoop > conveyor belt > square mesh > wheel > hand push

Analysts should be able to produce at least three well-considered concepts. These are then annotated and developed to a level that is distinguishable as an acceptable solution or key assumption.

Critique
This method leaves a clear audit trail about how the judgments were reached and it reduces the chance the events will play out in a way that the analyst has not previously imagined. Although it, allows analysts to identify intelligence gaps, it may yield too many possibilities. Morphological analysis could also be confusing. It is effective when used early in an analytic product to generate ideas.