Advocating for the Use of Social Network Analysis in Individual Psychology

The quantitative methodology laid out by the authors as a general example of social network analysis starts with a questionnaire given to the group in question.  Based on the responses to that questionnaire, in regards to the frequency and nature of their relationships with others, a square matrix can be generated.  This matrix will show in numeric terms who is communicating in the group being examined.  The specificity of the information in the matrix can be improved by carefully shaping the questions on the survey to take into consideration the characteristics of the people on the list, examples are what organization they work for or what country they are from.  The authors believe that an area for the application of social network analysis in Individual Psychology is the study of Gemeinschaftsgefuhl, which has been translated as "social interest".

The section “Data Analysis for the Social Networks” provides a good overview of social network analysis.  It refers back to the matrix that was mentioned earlier and how it allows for the creation of dichotomous responses as well as the frequency or strength of communication.  Eight measure are employed for describing social networks:


Comparing two networks can be done descriptively or by using the Quadratic Assignment Procedure (QAP).  The QAP is a resampling approach using Monte Carlo methods.

The best example given in the article involved the analysis of HIV and HPV research on an international scale.  The countries in which the research was published are the nodes and all the information was presented as a graph.  The US had the most research, therefore the USA node is the largest.  The width of the connections indicates the number of collaborations between any two countries.  This is just one example, the nodes could easily be organizations, schools, or families. 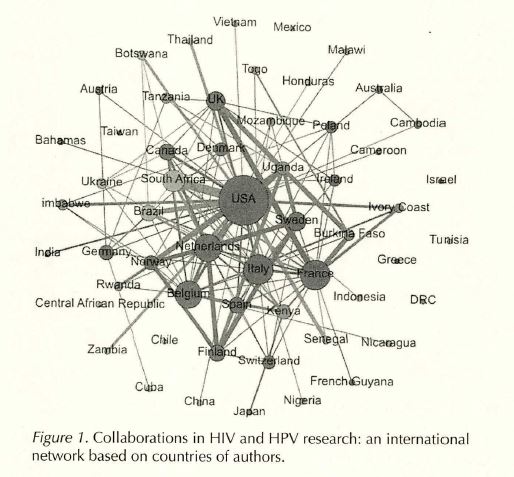