Dynamic Spread of Happiness in a Large Social Network

By: James H. Fowler and Nicholas A Christakis

Happiness is a fundamental object of human existence to the point that the World Health Organization emphasizes happiness as a component of health.  A large variety of voluntary and involuntary factors determines a person’s happiness.  Emotional states can be “caught” or transferred directly from one individual to another in many different ways.  This study looked at how happiness spreads over long periods through a social network in both direct relationships and indirect ones (i.e. friends of friends) as well as whether there were geographical or temporal constraints on this spread through the network.

Looking at 5,124 individuals – deemed “egos” – each connected to others via friendship, family, marriage, coworkers, or geographically.  Each person who had a relationship with an ego – deemed an “alter” – brought the totally participants up to 12,067 studied individuals.  There were 53,228 observed social ties between 5,124 egos and alters, averaging 10.4 ties to family, friends, and coworkers.  Though there were substantial variations from person to person, with some egos ranging from several people with no friends to one person who was nominated as a friend by eight different participants.  The 3 types of defined friendship are the “ego perceived friend,” the “alter perceived friend,” and the “mutual friend.”  The first being the alter thinks of the ego as a direct friend, the second being the ego thinks an alter as a friend, and the last being both the ego and the alter consider themselves friends.

The study defines happiness as a positive emotion used a conventional measure using 4 items from the CES-D (Center for Epidemiological Studies depression scale) in which people were asked how often they experienced certain feelings during the previous week.  Happiness was considered a perfect score on each of the 4 items, but close to perfect results was also recognized and weighed.  The social network consists of the individuals (nodes) and relationships (social ties) between them.  Once all the nodes and ties are known, a picture can be drawn of the network to discern position within it.

Examination of the social network indicated that happy people tend to be connected to one another.  The below figure mapped the largest connected network in 1996 and 2000 based on a restricted set of ties among siblings, spouses, and friends.  Each node is colored according to a person’s happiness on a spectrum from blue (unhappy) to green (intermediate) to yellow (happy). 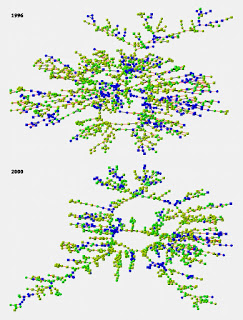 The clusters of happy and unhappy people seen in the network are significantly larger and calculable.  The relationship of an ego and alter’s happiness is calculable by measuring the probability that an ego is happy when an alter is happy and comparing it to the same probability in a simulated network.  This data also suggests a relation between network centrality and happiness as people at the core of their local networks are more likely to be happy.  It should be noted that happiness itself does not increase one’s centrality at subsequent time points.

While there are many determinants of happiness, whether an individual is happy also depends on whether others in the individual’s social network are happy.  Happiness is not just a function of individual experience or choice, but is also a property of groups of people.  Social network analysis makes it possible to visualize the changes and ripple effects through a network to generate large scale structures and identify clusters within a network.  I found these results interesting considering that happiness generally requires close physical proximity to spread and that the effect decays over time.  Nonetheless, the analysis does not allow for the actual cause of happiness (or other emotions) to be identified.  It also recognizes that while the person to person effects tend to be string, they decay throughout the network so a particular mood or behavior ripple is very limited.