By: Division of Science, Education and Analysis Maternal and Child Health Bureau
http://mchb.hrsa.gov/publications/pdfs/trendanaylsis.pdf

The public health sector have a long history of monitoring trends and rates of diseases, risk factors, and behavioral tendencies of populations in order to assess current policies and develop new ones in hopes of creating a healthier population. Public health researches usually present data using large populations over a span of many years from national data sets. Time series analysis is also used along side trend analysis to describe the relationship between a risk factor and the outcome, The example the report uses is a study between pollution and hospitalization rates of children with asthma. For the sake of this report, the writer states that the time series analysis discussed focuses on the impact of the trends on hypothesized associations. Public health decision makers are trying to shift from analyzing trends of larger populations, to a smaller group or specific geographic area that would help develop more effective policies and programs. They are also trying to examine trends in indicators of emerging health problems which by definition are only available for short periods of time. Due to this shift in focus, their trend analyses need both descriptive and statistical approaches. However, one must remember that with a smaller sample size, statistical information is often skewed thus reducing analytic confidence.
This report also discusses the different kinds of error that can occur when taking a statistical approach to trend analysis including random error and sampling error. Also because there might be a lack of data regarding smaller samples or analyses, characterizing the overall shape of a trend could be wrong. This report argues that due to the changing interests in the public health sector, trend analysis must use new strategies when examining data.

Why Do Trend Analysis?

Health outcomes of a population is most easily understood if their frequency and distribution are described in terms of person, place, and time. Trend analysis can use these terms. Trends may focus on:

A series of conceptual issues must be addressed before analyzing and interpreting trend data regardless of the purpose of the analysis. These issues include:


In public health trend analysis is typically conducted at the ecological level meaning observations are time periods and not individuals. The fewer number of time periods, the smaller the sample size which in turn increases one's potential for error. The larger the time period, the more likely it is to precisely identify patterns.
The presence of outliers must be analyzed to determine if this incidence is a random occurrence or if it reflects the departure from a general trend which is important for trend analysis.
"The accuracy of numerator and denominator information over time is also very important in insuring meaningful interpretation of trend data. If both numerator and denominator data for an indicator are available for each time period being studied, then these can be easily analyzed."
These changes are especially important to monitor when monitoring smaller populations due to the bigger effect it would have. For example, demographic changes such as a shift in ethnic composition may be more pronounced at the county or community level than in a state or the nation as a whole. Other changes over time that are of concern when conducting trend analysis include changes in laws or public policy that could affect eligibility or access to certain programs, or even cultural trend shifts such as the reduction of substance abuse.


Tables, graphs, and statistical analysis are tools for examining trend data (graphs are especially effective as they provide a visual means of describing a pattern). The first step to assessing a trend is to plot the actual observed numbers by an appropriate time period. This step is important because it establishes the outliers and helps the observer become familiar with both the absolute and relative levels of the numbers being studied.Visual inspection of the data permits the assessment of the overall direction and shape of the trend.
To make the visual easier to interpret, data transformation and smoothing is possible. For example, putting the rates on a logarithmic scale can 'flatten' the series of rates as seen in this example of infant mortality in Chicago: 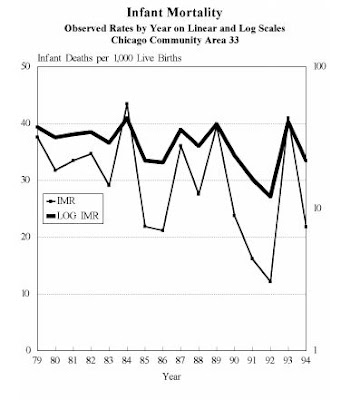 In statistical approaches attempt to 'smooth' data, they aim to increase the stability of the rates by diminishing their jagged appearance. Smoothing can be accomplished by using various forms of averaging, including use of multiple year rates, moving averages, and regression procedures. Public health professionals often use 'collapsing' by combining the numerators and denominators for two or three years of data rather than using the annual rates. This effect increases the stability by increasing the sample size of each point, but also results in a loss of information, leaving less points making it more difficult to portray a pattern. Here is an example of a 'smooth' and collapsed graph: This report gives general guidelines when presenting this information to a wider audience:

Although long, this report is very detailed especially when describing the different statistical approaches to trend analysis. For the sake of public health, statistical approaches are better than descriptive ones because public health topics involve larger sample sizes and populations but this is not always the case regarding intelligence questions. I think that in some intelligence cases, the why is very important in determining how a person/country might act which may be the result of a specific occurrence. For its own purposes, I think this report did an excellent job but for our purposes I believe descriptive analysis is also very important when it comes to forecasting.