Introduction
This article by Vernon F. Dvorak, discusses the implications of analyzing cyclones with intensity analysis, by using satellite platforms. Dvorak notes that satellite imagery is highly useful in monitoring tropical cyclones because methods have been developed that allow analysts to estimate the intensity of the cyclone based on certain distinguishing cloud features.
The Technique
The technique of combining intensity analysis with satellite imagery yields rather good estimates in terms of forecasting storm intensity. The specific cloud features that are used to estimate cyclone intensity are derived from two categories of features: "central features" and "outer-banding features". Each of these features is assigned a "T-number" ("T" for tropical) which denotes tropical disturbances. T1 describes disturbances "exhibiting minimal but significant signs of tropical cyclone intensity", whereas T8 denotes the "maximum possible" cyclone intensity. Next, each of the cloud features is analyzed to determine whether the cyclone will remain at its modeled intensity over the next 24 hours.

The Analysis Procedure
The intensity analysis via the satellite platform consists of three stages. The first stage "requires a qualitative judgment as to how cloud features related to cyclone intensity have changed between yesterday's picture and today's". The second and third stages of analysis involve examining the overall cloud pattern and component features to see if they agree with the modeled intensity estimate that the forecasters arrived at during the first stage of analysis.
The Forecast Procedure
To come up with the actual intensity forecast, the researchers have to use either the cyclone's model curve to obtain tomorrow's intensity or adjust the curve when an interuption due to landfall or the approach of some unfavorable circumstance is near. These changes can be detected with an unexplainable change of T-number or in changes to the cloud features.
Performance
A researcher named Erickson conducted the first tests using intensity analysis via satellite imagery in 1972, and his results have shown good consistency. Another researcher by the name of Arnold (1972)used the T-number estimates in tandem with the Joint Typhoon Warning System estimates for the west Pacific and had pretty good results as well. 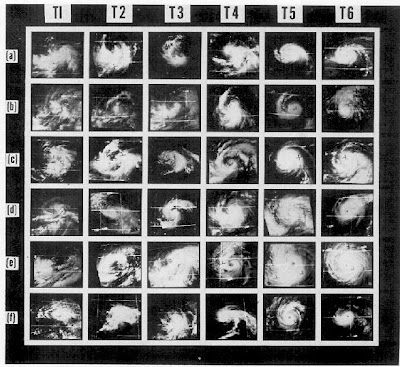