In Applying Analytical Methods to Study Terrorism, Sandler and Enders discuss choice-theoretic and game-theoretic methods and the study of trends and forecasting in terrorism. They apply game-theory as a method to the study of terrorism in which "strategic behavior among rational players is assumed that allows a player to anticipate the response of others to its own actions". Operating under the assumption that terrorists function as rational agents, game theory has the potential to allow us to make predictions and decisions in response to their threats and attacks. It also allows for strategic advantage and bargaining behavior for decision-makers, a behavior relevant to terrorist organizations. Additionally, choice-theoretic models allow for a subject to maximize their profit (i.e. greatest reduction in terrorism) and forecast terrorism patterns.

Data on trends of terrorist attacks is provided in context, concluding that as rational actors, terrorists will reduce risk by choosing the mode of attack with least risk: bombings. With additional statistical analyses, studies have shown that a rise in casualties associated with transnational terrorism began with the U.S. embassy takeover in Tehran and the Soviet invasion of Afghanistan in 1979. Trends in the cycles of threats versus incidents with deaths from terrorist attacks can also be evident. "Threats had a primary cycle of just under year, while incidents with deaths had a primary cycle of almost 10 years." Understanding these cycles aids in the decision-making for when to augment defenses. Intervention analysis is another statistical technique used in counterterrorism that measures unintended consequences of policies on terrorist attacks internationally.

The authors state that "game-theory is an appropriate tool for understanding the strategic interactions associated with terrorists and those charged with counterterrorism." They proceed to offer a game-theory matrix involving two countries who both have the following decisions: preempt a terrorist attack, maintain the status quo and do nothing, or defend against a terrorist attack. The matrix combines two 2 x 2 matrices together. This figure is shown below. 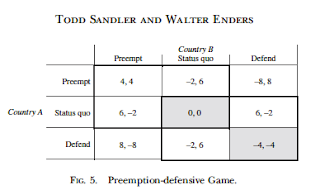 According to this matrix, the Country A would gain the most by doing nothing if Country B preempts and therefore allowing Country A to "free-ride" on their decision and in essence gaining from the offensive attack (top, left 2 x 2). This is reliant on the other country actually preempting an attack. However, if the roles of costs and benefits are switched, then each country's dominant strategy is to defend rather than maintain the status quo, but this has the lowest payoff in the game (bottom, right 2 x 2). Thus, this leads to an overly defended but unsafe world.

The provided data and statistical analyses on transnational terrorism was helpful in providing a context and additional background information on the decision-making skills of terrorists. This is important when applying the method of game-theory to this context because there first must be an understanding of the subjects in the method. The authors are also effective in explaining the benefit of game-theory's application to counterterrorism and showing how terrorists can exploit asymmetric warfare, evident by the matrix.

A serious limitation in this study, however, which was noted by the authors is that the matrix does not include terrorists as players. Although this issue was highlighted in the article, the authors did not attempt to include terrorists in the game-theory model they presented. This would require a new three-agent game including two countries/ governments and terrorists; it would have been nice to see an attempt at somehow creating such a matrix in the article. Because a country's decision on how to proceed in counterterrorism relies heavily on the behavior of the terrorist organizations, including them as a player in the game would add new beneficial insight into the methodology for this field. Nevertheless, the authors did apply a double matrix in which country A and B had two likely scenarios and weighed the cost/ benefit of the two decisions in relation to each other which was interesting and valuable.