Brain training games have caught the attention of western society and have especially caught the attention of the aging demographic.  To analyze the effectiveness of brain training on different age demographics, Nacke et. al (2009) utilized a 2x2 mixed factorial design, which included an age group (young and old) and game form (paper and Nintendo DS game console device).   Nacke et. al (2009) sought to analyze the  effect of age and game form on usability, self-assessment, and gameplay experience.  The results of the experiment were measured in three manners: effectiveness( completion time, error rate), self-assessment measures (arousal, pleasure, dominance) and game experience (challenge, flow, competence, tension, and positive/negative affect) (Nacke et. al, 2009).   The authors had four hypotheses: (1) Younger individuals will finish the test faster on a game-console, while older demographics will finish the test faster with paper and pen form. (2) Younger individuals will complete the task with less errors on a game console, as the older demographics will perform with less errors by completing the test on paper form. (3) Playing on paper will emit less arousal and flow as compared to taking the test on a game console. (4) The challenge level for the test will be much hard on the game console as compared to taking the test with paper and pen form ( Nacke et al., 2009).

The age range for the younger demographic was 18-25 and the age range for the older demographic was 65 and older.  All participants in the study were familiar with physical board and card games.  The game that was utilized for the experiment was Dr. Kawashima's Brain Training, most specifically its game called 20 equations calculation game.  This game requires the user to calculate 20 different random equations using mathematical operations of addition, subtraction, division, and multiplication in the shortest time possible.  A similar test was created for individuals to complete using only pen and paper.   Each of the participants took both sets of tests (Nacke et. al, 2009). 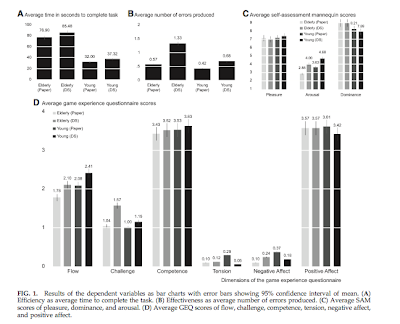 Results of the experiment as listed above found that no matter the participants age, taking the test with pen and paper form was far more effective as compared to taking the test on the gaming console.  The paper and pen form also resulted in less errors.  The authors found that taking the test utilizing the game console intrigued participants more and increased their interests in partaking in the test across both age demographics.  Moreover, it was found that the logic problem solving challenges that were presented with the game console test demonstrated that the elderly population conveyed positive feelings to the game, while the younger population conveyed negative feelings.  The authors concluded that digital logic training games provide a positive experience for the elderly population ( Nacke, 2009).  Additionally, it was found that taking the test on the game console took longer to complete for both demographics and resulted in more errors ( Nacke, 2009).

I found it interesting that the pen and paper method resulted in less errors from both the elderly and young populations even though the pen and paper method questions were answered quicker by both demographics.  Before reading this study I thought that the younger population would have performed less errors taking the test with the game console based on how technologically driven our age demographic has become.   One aspect of this study that the authors did not talk about was accounting for the learning processes of each respondent.  The authors did not determine if the respondents were better visual learners, or would complete the tests more efficiently using pen and paper methods.   Moreover, the Brain Training game console game was designed with an older demographic in mind as its target audience, so it is no surprise that the results of the experiment conveyed that the older demographic had more positive experiences with the game than the younger demographic participants.   I think that this study conveys the success of brain training games that would show positive results for the older and children age demographics, but does not efficiently test the cognitive abilities of young adults and middle age individuals.  I think that it would be necessary to conduct a study of a brain training game that would stimulate the mind more than doing simple mathematical problems.