Is It Safe To Go Out Yet? Statistical Inference in a Zombie Outbreak Model

The idea for using Bayesian theory applied to zombie outbreaks starts with a logical probability.  In the case of this paper, the authors state that in one day the far extremes of probability are that no human will turn into a zombie and all humans are converted into zombies.  This probability (labeled prior) is then updated as new data is used (such as different quantity of days) and thus this posterior distribution then becomes the prior and the process is repeated.

The authors then state that many questions can be answered by successfully finding a likely distribution for human to zombie conversion rates.  Such questions include how many soldiers should be mobilized, the scale of quarantine needed, and whether or not it is alright to leave a hiding spot given the number of zombie sightings during a particular time span.  The authors also emphasize that since the rate of change from human to zombie is likely to not be constant, the beta (conversion coefficient) should be a range and not a singular number.

One of the model comparisons the authors use is the comparison of two models: one that assumes zombies can attack alone while the other shows that after a rumor is circulated, zombies are believed to only travel in pairs.  The authors then seek to disprove the second model through Bayes factors (posterior odds = Bayes factor * prior odds), in which statistical evidence for the first model is weighed heavier than the second.  The authors find that the first model with the least amount of noise (introduced as Gaussian distributed noise) is more likely.  This means that the experimental data deviated the least from the expected curve.  Adding additional noise negatively impacted the Bayes factor (shows as how strong the evidence was against the second model. 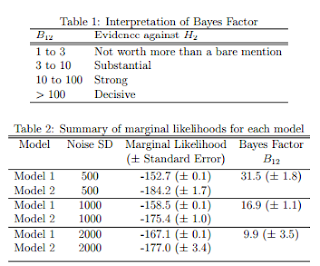 Another example the authors used Bayesian theory on was for answering the question of whether or not it is safer to leave a hiding spot based on the number of zombies spotted in the past few days.  The authors use two types of analysis for this: one that does not have any observations of previous day's zombie sightings and one that has five day totals of zombie sightings.  The stated the zombie sightings for the second case were 123, 127, 104, 92, and 74.  The left column of the figure below shows Bayesian factors applied to the first model mentioned above, and the potential outcomes.  The right column shows this process with a second layer of data (the five days of observations) which greatly reduces the uncertainty regarding potential zombie totals for the next 45 days.  Thus, due to these observations and using Bayesian theory uncertainty can be greatly reduced and the chance of surviving longer during a zombie outbreak are much higher. 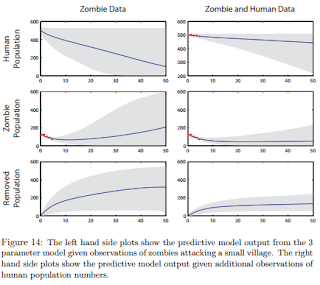 Critique:
I found this article to be fairly complex to read with no experience with Bayesian theory.  However, I really appreciate the application of Bayesian theory to a zombie outbreak.  Although this article topic is (most likely) fantastical, it is well constructed and thoughtful.  Honestly, the topic caught my eye and I doubt I would have tried as hard as I did to understand Bayesian theory had it been on a drier topic.

One issue I had with this article is that it was clearly meant for someone that had previous experience with Bayesian theory.  At times the authors referenced various aspects of Bayesian theory without defining them.  For example, the authors did not just list Bayes factors but instead referenced an article.  For the average reader this does not make reading and understanding this topic any easier.  Additionally, simple Bayesian theory is not that long or difficult to write out and would have saved me time having to look it up to double check I was thinking about the correct thing.

This article is not related to intelligence, save for if there were to ever be a zombie attack it would prove useful for intelligence analysts to extend their lifespans.  However, this model could be applied to medicine for spread of infectious diseases if the transmission rate is unknown.  Instead of zombies and humans there would be infected and healthy individuals.

Source:
Calderhead, B., Girolami, M., & Higham, D. (2010). Is It Safe To Go Out Yet? Statistical Inferencein a Zombie Outbreak Model.University of Strathclyde, United Kingdom.  Retrieved from http://www.strath.ac.uk/media/departments/mathematics/researchreports/2010/6zombierep.pdf
Posted by Unknown at 11:58 PM