Elizabeth Paté-Cornell presents a classical probabilistic Bayesian model that she believes can be utilized by the intelligence community to aid in the fusion of intelligence information. The awareness of the need for such fusion is apparent in the wake of September 11, 2001, which the author suggests the probability of impending attacks can be found through a Bayesian analysis. The author's two major arguments for the use of the Bayesian model in the IC, particularly related to terrorist attacks, is that it allows for the computation of the posterior probability of an event given the probability of the event prior to observing signals, and the quality of the signals based on the probabilities of false positives and false negatives.

Summary:
The author begins by discussing the problems associated with a fusion of information within the US intelligence community, namely difficulties in ensuring internal communications and the difficulties in merging the content of multiple signals, some more sharp than others, some dependent or independent of others. This research claims that Bayesian analysis can be applied to help solve the difficulties associated with the latter and is explained in terms of identifying the probability of an impending terrorist attack. It should be noted the author does not claim the model will better detect impending terrorist attacks, rather that it can increase the probability that an attack plan is foiled through guiding "clear thinking at a time when the amount of information is large and confusing and intuitions can be seriously misleading" (Paté-Cornell, 2002, p. 454).

The elements of Paté-Cornell's Bayesian model can be explained through the following notations: 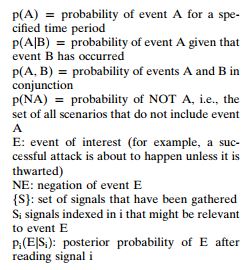 Namely, the event of interest throughout the article is an impending terrorist attack. Through the model, the author presents formula that addresses both the prior probability of the event occurring before reading signals, such as intercepted telephone conversations, as well as the quality of the signals. The formula, as appears in the following figure, considers what alternatives to the event of interest could occur in conjunction with the signal, a very important thing to consider in the intelligence field.

Estimating the prior probability of an impending attack can be considered as a combination of the intention of the enemy to attack, the effective planning of that attack (ie. the ability of the perpetrators to coordinate a plan and avoid detection), and the successful implementation of the plan on a given day (ie. the ability of the perpetrators to carry out the plan and avoid target's safeguards). The author argues that the identification of these probabilities alone is of use to the intelligence community given the chance to reduce the probability of an attack attempt through various measures hitting these areas (ie. cutting flow of funds or increasing security).

Critique:
The research applies a Bayesian model by using hypothetical numerical illustrations for the interpretation and fusion of intelligence information and could be strengthened through the use of real-life numerical examples, though sensitive in nature. Additionally, the author switches between examples for multiple formulas, sometimes relating it back to the overarching theme of terrorist attacks, while other times relying on the unrelated example of testing chemicals for poison. This back-and-forth detracts from the overall readability of the research and does not add to the application of the model to the intelligence community. The author uses good examples of potential signals used intelligence but does not carry them throughout the research.

The author further admits some limitations of the research. First, the assumption that both the event and the signals are black and white, either they occur or they do not occur, which is not always the case, particularly in the intelligence community. Further, the research assumes that the likelihood of false signals, whether positive or negative, remains the same throughout time, also unlikely in the intelligence field. Finally, many of the sources of data for such a model are difficult to accurately quantify, including the frequency of past observations, reliability data for sensors or links, or expert opinions. For instance, how can we accurately, and quantitatively, determine the reliability of human intelligence?