Summary:
In the article Interactive Dynamics for Visual Analysis, Jeffrey Heer and Ben Shneiderman (2012) provide a taxonomic guide for analysts, researchers and other professionals to create visual analysis tools. They discuss the usefulness of visualizing data for comprehension in saying that "by mapping data attributes to visual properties, ... visualization designers leverage perceptual skills to help users discern and interpret patterns." The authors also stress the importance of ensuring that the visuals are appropriate and intelligible for the consumer.

The authors describe three dynamics for visual analysis, each of which include examples of task types or steps that fit into those descriptions. The three dynamics are Data and View Specification, View Manipulation, and Process and Provenance. Data and View Specification involve determining which data is to be shown and visualized with programs such as Microsoft Excel. Then it involves the filtering of data which shifts the focus among the different data subsets to isolate specific categories of values. Sorting the data can show surface trends and clusters and organize data according to a unit of analysis. The following image shows a more complex form of a matrix-based visualization of a social network.

The first matrix plot shows a social network when people are sorted alphabetically. The second plot shows a reordering by node degrees resulting in more structure and the third plot is permutated by network connectivity, showing underlying clusters of communities. The final step is to derive new attributes from existing values when input data is insufficient.

The second dynamic is View Manipulation which consists of highlighting patterns, investigation of hypotheses and revealing additional details. Selection allows for pointing to an item of interest, for example, dragging along axes to "create interactive selections that highlight automobiles with low weight and high mileage." Navigating is determined by where the analyst begins, such as in a crime map that depicts crime activity by time and region. Coordinating allows the analyst to see multiple coordinated views at once which can facilitate comparison. This can be done in histograms, maps or network diagrams. The following image shows a complex patchwork of interlinked tables, plots and maps to analyze outcomes of elections in Michigan. 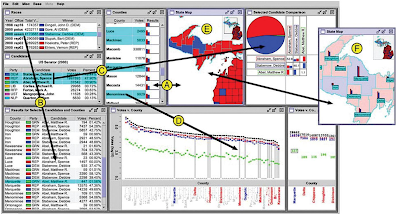 The final dynamic is Process and Provenance which involves the actual interpretation of data. Recording involves chronicling and visualizing analysts' interaction histories in both a chronological and sequential fashion. Annotation includes recording, organizing and communicating insights gained during analysis. Sharing involves the accumulation of multiple analyses and interpretations derived from several people and the dissemination of results. Guiding is the final step and includes developing new strategies to guide newcomers.


Critique:
This article was very effective in both showing many ways of visualizing data and also the importance of visualization in comprehension and facilitation of analysis. The inclusion of some well-known applications such as Google searches and crime maps and their many examples were beneficial in the authors' explanation of the taxonomy for those readers who don't have extensive experience with other specialized software or the field. It was also important that the authors distinguished between what may be visually intriguing but don't have much real-world application.

Some of the features explained within each dynamic were directly applicable to the intelligence field or anyone conducting an analysis of data, such as the investigation of financial markets or terrorists networks. I can foresee this field being a new avenue to explore for more effective communication between analysts and decision-makers. Analysts often learn that decision-makers prefer concise, clear and preferably visual information but may not know an effective manner to convey such information. This article provides a basic but helpful overview in how to go about visualizing data.