Summary:
Reilly, Nozick, Xu, and Jones (2012) developed a model of interactions among government, terrorists, and carriers of hazardous materials using game theory. Their intention was to understand how governments might prohibit certain travel routes for carriers shipping hazardous materials, how the carrier might decide which routes to take in response to the prohibitions and the threat of terrorism, and how terrorists might target available links and in what frequency. An extension of a two-person, non-zero sum game, Reilly et al. constructed a  non-cooperative, non-zero sum three-person game in which the government is the leader and both the carriers and terrorists are followers. 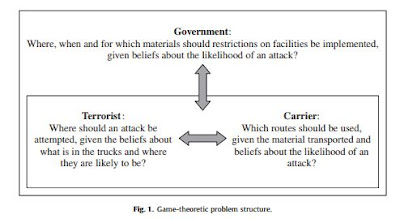 The idea of the research is that governments will respond to threat levels of terrorist activities by restricting the transportation of hazardous materials that could place the greater population at risk. These restrictions would likely come in the form of prohibited travel routes for carriers to reduce risk. In reaction to these restrictions, carriers must decide which routes to travel while considering travel time and consequence measure, a combination of population exposure and accident probability. Terrorists meanwhile react to government restrictions by choosing targets whose access will not be impeded by such route restrictions. The research operates under the assumption that the terrorists will be equally aware of route restrictions as carriers will be.

A case study applying this to the rail systems used by carriers of hazardous materials found 259 links which could be considered of interest to the government in terms of risk restriction. The research considers the change in expected payoff for terrorists upon restrictions, compared to the change for carriers. In some surprising cases, the expected payoff for terrorists increases with government restrictions, while other times it returns to the same point as no restrictions, though at a substantial expected loss for carriers who cannot transport a percentage of their total carloads due to the restrictions. This shows that despite government's best intentions, route restrictions may further exacerbate threats.

Critique:
The research by Reilly et al. only represents the interactions between the three parties for the movement of hazardous materials by a single carrier. While this creates reasonable rules to predict carrier and terrorist actions with regards to a maximum allowable expected payoff for the terrorist, it significantly limits the scope and utility of the research in the intelligence and policy fields. As the authors note, to improve the research the formulation and solution procedure should be expanded to handle multiple carriers with several origins and destinations. Additionally, the current research lacks depth in that it only considers single attacks by terrorist organizations, rather than coordinated attacks. Given the maximum profit-seeking nature of terrorists, this inclusion would also substantially improve the utility of the research.

The research, or perhaps the limitation of game theory, also fails to include the albeit unlikely scenario that government restrictions on particular routes would cause either carriers to cancel shipments altogether and/or for terrorists to change targets away from hazardous materials if the expected value is not significant enough. In some of the cases presented in the findings, the carriers project substantial loss, though this application of game theory does not account for the potential political backlash carriers may inflict on government, complicating the goals of government. It is narrow-minded to assume that any government will strictly look to minimize security threats without considering the economic and political backlash such closures would have. I do not consider this a failure of this particular research, rather a weakness of game theory itself.